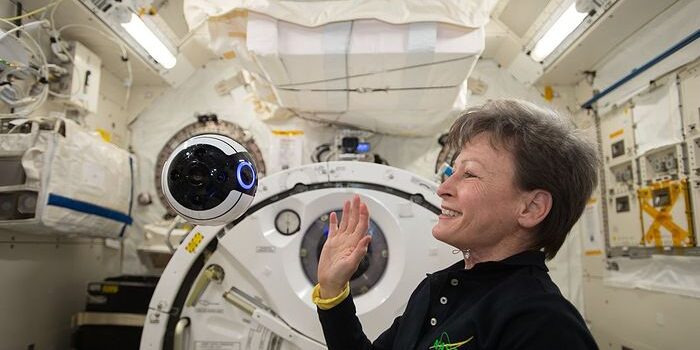 A team of Sydney school students has successfully competed in the preliminary round of the Kibo Robot Programming Challenge 2021 (Kibo RPC), an international STEM coding competition hosted by the Japanese Aerospace Exploration Agency (JAXA) in collaboration with NASA and the space agencies of the Asia-Pacific region.

On Sunday 18 July, representative teams selected from nine countries came together virtually for the International Programming Skills round, where teams submit coding to instruct a NASA Astrobee robot to fix a hypothetical leak on the International Space Station (ISS).

Team Dream Rover from Sydney Robotics Academy took seventh place out of the nine countries. The team had previously earned the right to represent Australia in international competition by winning the national trial round earlier this month.

Impressively, whereas most other countries were represented by university-based teams, Dream Rover is a team of Sydney primary and secondary school students – Albert from Scots College, Annabel from Artarmon Public, Joshua and Ethan from Sydney Boys High, Douglas from Killara High and Jai from Knox Grammar.

“We are very enthusiastic about this competition because we are interested in deepening our understanding of space and robotics. During the process of the competition, we developed a special bond through our common interest, and learnt about teamwork and determination. With hope, skill, and some luck, we endeavour to bring the Dream Rover spirit out into space,” the team said.

While the preliminary rounds of the competition occur on a simulated version of the ISS, the final round will be held live onboard the ISS Kibo research and education module, where code written by the nine top teams is uploaded directly onto the Astrobee robot. The results from the preliminary round dictate the starting order.

The program is designed to develop students’ educational and professional goals to a higher level by giving them the opportunity to pick up new coding languages, learn from actual Astrobee code and develop creative ways to solve novel problems such as effective robot navigation in microgravity.

The atmosphere of the whole competition is positive. Teams are able to work together, to come up with solutions to challenges and to develop each other’s coding and problem-solving skills.

The One Giant Leap Australia Foundation (OGLA), supported by the Australian Space Agency and the Office of the NSW Chief Scientist & Engineer, hosted Australia’s 2021 preliminary trial round with 15 participating teams. Each team had a month to learn JavaScript and the Android programming environment, simulate their code on JAXA’s Astrobee simulator, and attain the highest score possible by meeting certain criteria, being accurate and working under various initial conditions.

“Inspiring the next generation of the space workforce through STEM education and activities like the Kibo Robot Programming Challenge will help support the growth of Australia’s space industry in the years and decades to come,” said Head of the Australian Space Agency Enrico Palermo.

“A big congratulations to Dream Rover for their accomplishments as part of this year’s challenge. May this terrific achievement inspire many other Australian teams to participate in 2022.”

“We were delighted to be able to support this exciting STEM initiative and we celebrate team Dream Rover’s success,” said NSW Chief Scientist & Engineer, Professor Hugh Durrant-Whyte. “Coincidentally, just last week the NSW Government announced the establishment of a NSW Space Research Network, so it’s entirely appropriate that we’re encouraging our next generation of scientists to further develop their interest and excitement about STEM, space, robotics and their potential future career prospects in these industries.”

“Unique, high quality, equitable, engaging STEM education opportunities are essential to inspire the next generation of students to improve our nation’s space capabilities and create a well-rounded workforce. Kibo RPC is a terrific example of one of those programs,” said One Giant Leap Australia Foundation Director, Bob Carpenter OAM.